Hi. Long time no see. Another one-shot for you all.

Some idea of Pure Crack and Under the Covers (they’re below if you scroll down) is needed. That said, hope you like.

“I mean…he’s not ordering anything. He didn’t nod or say anything when I asked if he wanted the usual. I’m not even sure he saw me.”

“Sometimes Master Lan like that,” Soji said with a grin, wiping his hands on the apron.

“Sure, I know he’s weird,” Rowan replied. She tugged at his sleeve. “But I swear, chief, something’s wrong with Straight Black, please go look?”

She looked truly worried. Rowan, a boyish girl that almost never got worried about anything she could handle, was worried. Soji removed the apron and followed her.

He found Lan at the corner table, breathing heavily while blankly staring at the empty table.

He shook his head. His forehead was dotted with sweat. His hands were stiff over his knees. He tried to slow his breathing but completely failed. “No. Please.”

Soji placed a hand on Lan’s shoulder. “Master Lan? What is wrong?”

“No, please, no,” Lan repeated. “Don’t call me that.” He kept staring at the table. The hands trembled over his knees. Lan stared at the table, acknowledging Soji but not looking at him.

Soji checked the forehead and the neck, but they did not feel warm. Yet clearly something was wrong. “Master Lan, I take you upstairs, yes?”

“Don’t call me that, please, please…”

Soji pulled him up and slung an arm around his shoulder. “Rowan, find Miss Beika at infirmary. I bring Master Lan upstairs…”

“Stop calling me that!” Lan shouted.

Rowan ran out of the coffee shop.

Soji sat Lan on his small bed. He held his shoulders. “What is the matter? How I help you? Mas— um, Lan?”

Soji drew him close. “Shhh, Lan.” He more or less knew the story. He knew what happened afterward. “It’s in the past. It’s not now.”

“Don’t talk!” Lan begged. He stopped his body from trembling by pulling at his hair and covering his ears with his arms. But his body kept shaking. “I don’t want to call you things you hate. Just…make it stop.”

So he knew who Soji was; his brain was just too rattled to name him. “Alright….Lan. Shhh.” Soji kept holding him as Lan kept trembling and panting, as he sobbed into Soji’s shirt. Soji held his head.

Lan tightened an already heavy grip on Soji’s shirt. The trembling and panting slowed as he kept his head over Soji’s shirt and his hands tightened near the waist.

Soji kept patting the head he held. The trembling was replaced by the sobbing, soaking Soji’s shirt in tears. Lan’s kept his head over Soji’s chest.

“Shhh, Lan. No mistake that you are here.”

“Stop! Stop talking! Don’t talk to me!” he shouted.

As the sobs subsided, Soji gently lay Lan down on the bed. He smoothed down Lan’s hair over the pillow. “Rest for now, alright? I finish work, then I come back. Alright?”

But Lan’s eyes had shut, and Soji received no reply.

“Well? What did Miss Beika say?” he quickly asked Rowan, reaching the kitchen.

“She’s very busy at the infirmary, and she can’t come,” Rowan said, immediately getting a notepad and readying to get orders. “But she doesn’t think it’s very serious, as long as we keep an eye on him tonight.”

“But what she say happened?”

“Maybe a panic attack, she said.”

Soji sighed with relief as he donned the apron again. The coffee shop was filling with the dinner crowd. Lan needed to be better without him.

It was several hours before Soji returned to his upstairs apartment. The dinner hours were a busy time for the coffee shop, filled with both students and workers. There was no time to even check on Lan, as orders came continuously for pasta and muffins.

Beika indeed did not appear that night. Soji was familiar with that pattern of not having Beika around because of infirmary duties; it was just a bit difficult having Lan being problematic without having Beika.

Soji took a deep breath before he opened the door to his apartment.

It was dark as he entered. He opened a few lights before heading to the bedroom.

Lan was asleep on his bed, tossing and turning.

Soji placed a hand over his head. “Shhh, Lan. Is alright now.”

He knew about evenings filled with nightmares. He knew how awful they were. He had most of them while waiting for things to happen for the redhead beside him, either way, in the side of the river. By the time he found himself with friends and at the neighboring capital, most of the nightmares had been nightmare-d out of his system.

He remembered when he found him the first time, more dead than alive, by his own hand. He remembered saving him in a way he knew, hoping someone would come along who knew what to do. He was not sure why he saved the redhaired Pendika then. He remembered thinking that the redhaired young man was too young to be dying, and dying without violence. Nothing more, nothing less.

He was since then proven right, and Lan was now his friend.

Beika and Marceau, who faced the aftermath of the firestorm during the ensuring days, had consummated whatever pain they had from those events. Beika had already told him about her father, who died during the firestorm, in the many conversations they had over peach cake. Marceau had buried herself in the government work the event had caused.

But because Lan ran away from himself, and shut himself down, he had never properly faced those events yet. The thoughts sometimes came, in terrifyingly heavy torrents of anguish.

He took up Lan’s hand and squeezed it. “I am here now.”

He did not dare say more, but he settled beside him.

Soji felt an arm wrap around his waist. It drew him closer. It held him well, clutching at something safe and warm.

He felt sweat and warmth over his back. He felt breaths gently slowing as it breezed over his ear.

He held the hand placed over his torso. He placed it over his own heart.

Soji felt the heart beating at his back slowing to a regular pace. He felt the breathing of deepening sleep. He felt the arm wrap tighter around his waist.

He did not regret the many days he waited, the evenings of nightmares he fought alone, if they meant that he could now help him.

His life running a coffee shop gave him early mornings and late evenings.

His body woke him up before the sunrise. Soji gently untangled himself from the bed. “Sorry,” he said, while doing so. “I have work.”

Soji looked at him, as he ran a hand over Lan’s red hair. Lan still looked tired. At least he now looked more at peace.

He looked again at him. “Still early. Go sleep,” he prompted.

He squeezed his hand again, then kissed it. “No mistake, that I found you. None.”

Crazy writer, bookworm, anime fan, and a few other things. 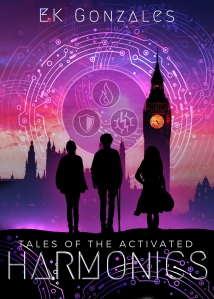